This tutorial will walk through calculating three key summary measures of variability in data - range, IQR, and percentile. 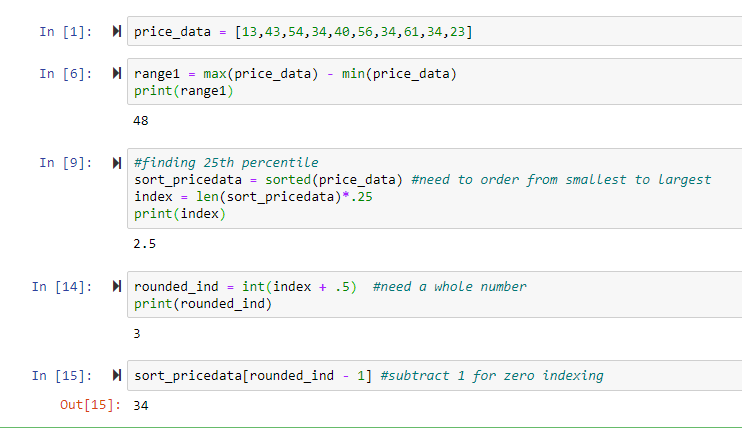 Range, IQR (Interquartile Range), and Percentiles are all summary measures of variability in the data. As we learned in the last post, variance and standard deviation are also measures of variability, but they measure the average variability and not variability of the whole data set or a certain point of the data. This is where other statistical measurements help us break up the data into parts for easier understanding of variability. Additionally, these metrics are easier to solve for so range, IQR, and percentiles are all used as shorthand calculations to check for how dispersed your data might be.

Range is the simplest of the measurements but is very limited in its use, we calculate the range by taking the largest value of the dataset and subtract the smallest value from it, in other words, it is the difference of the maximum and minimum values of a dataset. Take this set of numbers: 1,3,3,3,4,5,4,5,10, the range is (10-1) which is 9. However, if I change the 10 to 1000 in the dataset the range is 999. Therefore, the range is very susceptible to outliers and does not measure how clustered the data is. We will not be using it much, but it is important to learn about it and its drawbacks as they are motivations for the other measurements we will discuss in this post.

Percentile is an interesting measurement that you have probably heard in the context of test scores or your height and weight. Therefore, this is the first relative measurement of dispersion, meaning that it is scored in reference to the other data in the dataset. Before diving into solving percentiles – let’s examine what this statement means; “Ben scored in the 75th percentile on the SATs”. Does this mean that Ben scored a 75 or that he has the 75th best score? No, not at all, this does not tell us anything about Ben’s score or how many data points they are. Rather, this statement means that Ben scored better than 75% of the other test-takers, which means Ben scored worse than 25% of the other test-takers. If you read the previous posts we spoke about median, now take a second and think about how the median can relate to percentiles? The answer is median, the middle value is another name for the 50th percentile.

If the median is a type of percentile, what was the first step to solving for the median, ordering the data set from smallest to largest? The next step is to multiply the total number of values in the dataset by the percentile you want. The result of this step will give you the index, keep in mind if the index is not a whole number round it to the next whole number. Now that we have an integer as our index, count the values in your data set from left to right until you reach the index value. This is a very similar concept to the median and we saw that Python zero indexes which can lead to some careless errors, so be careful!

The last topic we will discuss is the interquartile range which is a measurement of the difference between the third quartile and the first quartile. The first quartile, known as Q1, is the value of the 25th percentile and the third quartile, Q3, is the 75th percentile. The IQR is a better and more widely used measurement because it measures the dispersion of the middle pack of data and is less sensitive to outliers.

Now that we understand these measurements, let’s go over how to calculate them in Python using no packages as the formulas to solve for these three measurements are remedial.

The mode is the value that occurs the most frequently in the data set. A good trick to remember the definition of mode is it sounds very similar to “most”. This is probably the least useful out of three statistics but still has many real-world applications.