Let’s go back to our example of test scores: 83,85,87,89,91,93,95,97,99,100. The average of these test scores is 91.9, while the standard deviation is roughly 5.5. So, what does this 5.5 really tell us about the test scores? The number 5.5 shows us how the numbers are spread out from the mean and 5.5 is a relatively low standard deviation score. This tells us that the data is fairly central to the mean and there are few if not no outliers in our dataset. If this is confusing for you, let’s take a look at the image below. 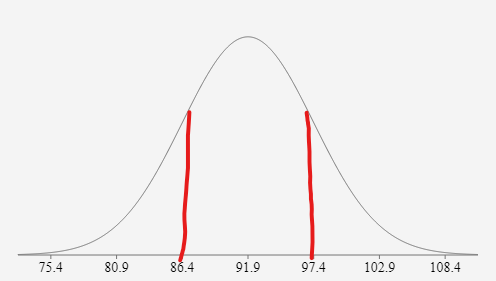 Now that we understand the definition of standard deviation and can visualize – how can we find it? Well before we know how to solve it, we must go over some Greek mathematical letters. Below is the full equation for standard deviation – if it seems very daunting do not worry, I will go over each variable and what it means. The lower-case sigma represents the standard deviation and the is equal to the square root of a complex fraction. The denominator of the fraction is encapsulated by an upper-case sigma which means it’s a continuous sum of the parenthesis. In the parenthesis, the x represents a specific data point in our set – mean and then we square it to get rid of any negative. We perform this on all the data points in the data set and add up the result, once we get the final sum we divide it by the size of the data set and take that number and square root it. 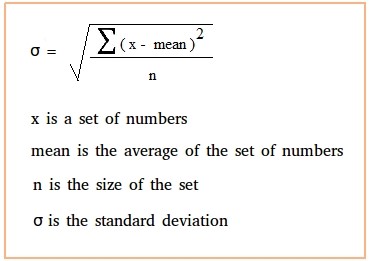 This is a complicated process and requires that the data stays the same since each data point is calculated individually and then added to an overall sum. Therefore, Python is great for a calculation of this sort as it does all the heavy manual calculations for us. It is important to note that writing a function for standard deviation using only Python code and no packages is virtually impossible for a beginner and intermediate programmers. Lucky us, the beauty of Python is the ease of importing packages to carry out various tasks. Numpy, Pandas, Matplotlib, and Sci-kit Learn will all be discussed at length in later blog posts but for now, we will use the math package which comes with the basic python build. This package is powerful but still does what Pandas can do in one step in a few different steps.

*In this code example I will be using financial data from a stock because standard deviation is a very commonly used metric when discussing volatility. The data is from the Chipotle’s stock, all of the pricing data in this example is real and is the ending price of the CMG at the first of each of the last eight months.

Now, ask yourself – would you consider Chipotle a volatile company or not?

See our Python and related programs:

The mode is the value that occurs the most frequently in the data set. A good trick to remember the definition of mode is it sounds very similar to “most”. This is probably the least useful out of three statistics but still has many real-world applications.