Now that we have learned about the mean, let’s learn another central tendency statistic: median. The median refers to the middle value in a dataset, but the dataset must be ordered either smallest to largest or largest to smallest. Depending on the size of your dataset, the median can either be a quick hand calculation or a very tedious task that is open to many mistakes. Furthermore, if the dataset contains an odd number of values calculating is more straight forward than if it contains an even number of values because you have to cross off values and then calculate the average between the two leftover numbers (do not worry so much about this, thanks to an easy formula we will introduce).

The Use for the Median

Before learning how to calculate the median, let’s discuss why we would ever want to solve for the median. In school and in everyday life, people prefer to use averages over the median, so why take time and learn about the median? We only really use the median in reference to “income” and “house prices”, but why does this phenomenon of only using the median in rare occasion exist. I only think the reason we do not use the median is that it can be a pain to solve. However, I think the median is actually a better measurement of data than the mean, at least in a majority of cases. Especially, when Python does most of the heavy “lifting” for you, therefore I would always prefer to use the median as a more effective summary metric.

What if a dataset is large and ordering and crossing out is extremely time-consuming and leaving the ability of human error to take over? A good shorthand trick to calculate the median is to follow these three steps. The first step is to order the list in smallest to largest or vice versa. The second step is to count how many data points are in your set, so if we are using the test scores example from the above that number will be 11. The third step is using the formula: (number of data points + 1) / 2. This formula does not give you the value of the mean but rather the position in the list. So, going back to the grades example, the formula would produce a value of six and the grade in the 6th position of the list is 94. Keep in mind, if the answer is a decimal, such as 6.5, then take the average between the value of data in the 6th and 7th positions.

So now that we know how to solve and why we would want to solve for the median, let’s look at how to program to get the median in Python. It is always important to master the mathematical concept by hand since Python does the calculation “behind the scenes”. Below, I am going to show how to get the median in vanilla Python with a data type such as a list. The second example which will be covered in a couple of articles will be much simpler but can only be used if you imported pandas and your data is organized in a dataframe. If these last two sentences confuse you, do not worry just stop reading and sign up for one of these awesome Python Courses or Data Science Classes that are offered both in-person in NYC or live online. 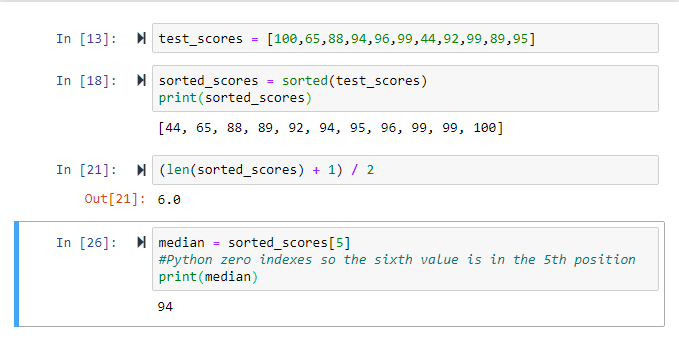 Data Science is truly comprised of two main topics: math and programming. However, one does not need to be a computer scientist or mathematician, one does not even need to have taken algebra or a basic programming class to start.