Making liquid and fluid animations in After Effects might seem daunting, but it’s actually much easier than it sounds. After Effects offers a wide variety of Effects that gives users the power to simulate nearly anything. In this tutorial, we’ll be focusing on creating a graphic, “cartoon” style liquid animation with just a few effects

This tutorial is going to cover using Wave Warp to simulate liquid motion, as well as using Turbulent Displace and Drop Shadow to really sell the Effect. We’ll also be animating our liquids and a bit of text to create a fun wave animation! This tutorial has a bit more setup done for you in the files so you can focus on making some sweet waves. Let’s get to it!

1. In the file you should see a text layer, with two shape layers beneath that. Beneath those is a vignette layer, another text layer, and a .jpg and solid at the bottom. Don’t be scared off by the number of layers; all we’ll be focusing on is three layers.

2. Toggle the Visibility of each layer off and on by clicking the little eye icon next to each. This will allow you to identify which layer is which object on the composition.

3. Right off the bat, we’ll be adding our first and most important effect,  Wave Warp.

5. Go up to the Effect panel in the topmost toolbar.

6. Navigate to Effect>Distort>Wave Warp. It should be all the way at the bottom.

12. Now, here’s the cool part. Hit Spacebar on your keyboard to play back your animation. You’ve already made some animated water!

13. In prep for the next step, hit the Visibility icon next to the wave base layer to hide it.

14. Hit the Visibility icon next to the blue wave layer to hide it as well.

15. Waves have foam at their tips, so we’ll be creating a near-identical foam layer beneath our blue wave. We could make a whole new layer from scratch, but let’s utilize the layers we have already. Select the blue wave layer.

16. Hit Cmnd+D (Mac) / Cntrl+D (Windows). This will duplicate your blue wave layer right on top of it.

17. Since it’s invisible at the moment, hit the Visibility icon to turn it on.

18. In the Effect Control panel for this layer, it’ll have the same effects as the layer it’s duplicated from. Select the Gradient RampEffect.

19. Hit Delete on your keyboard to make the layer one solid color.

21. Click on the box to the right of the word Fill.

22. A color picker appears. Slide the picker to the top left to make it pure white or enter #FFFFFF in the hex code box.

26. Rename the layer to white wave.

27. Click anywhere on the white wave layer in the layer stack and drag it below the blue wave layer.

29. Go up to Effects >  Perspective>Drop Shadow.

31. In the Effect Control panel, click on the box next to Shadow Color.

38. Now, let’s add one more effect to give the foam a “blobby” look. Go up to Effect> Distort>Turbulent Displace.

40. In the Effect Controls of the Turbulent Displace, change Amount to 15.

41. Change Evolution to 200 degrees. Your new effects should look like the screenshot below. That’s it for the effects! This was the bulk of the exercise, and now it’s onto a bit of simple animation to finish the project. 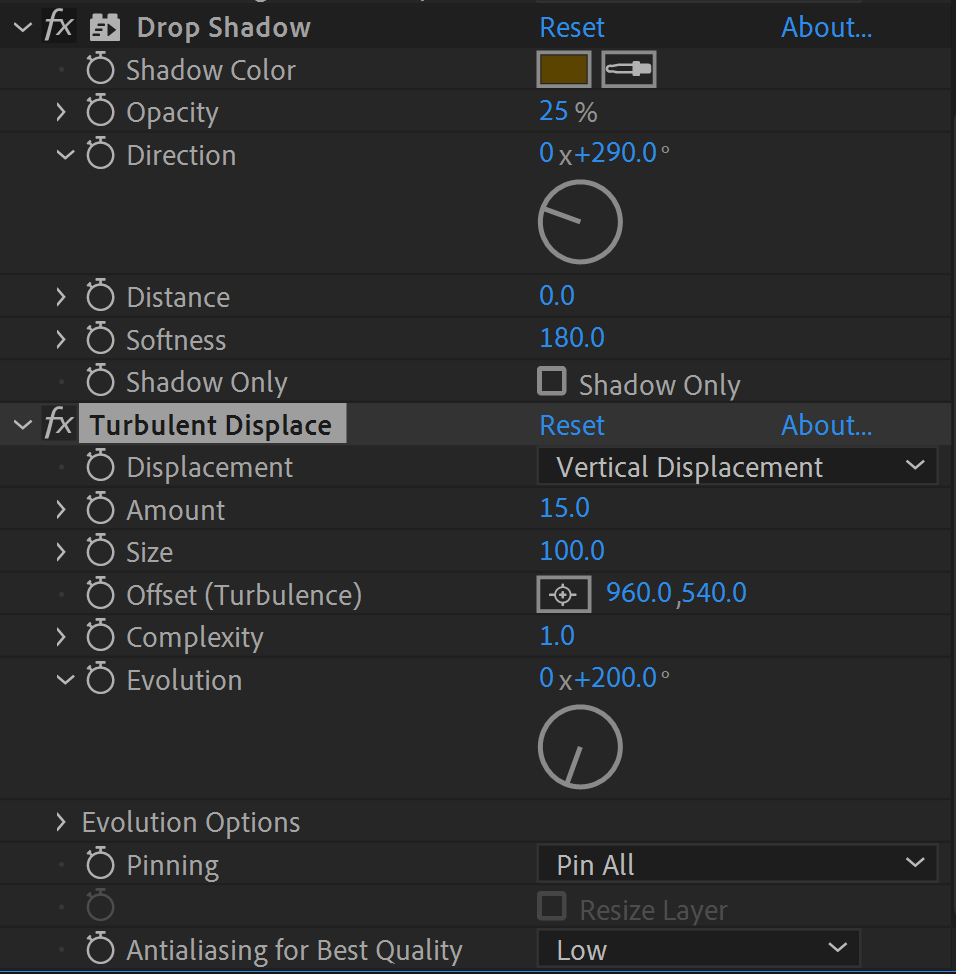 1. Hit the Visibility icon next to the blue wave layer to turn it back on.

2. Turn on the Visibility of the wave base layer as well.

4. Press the P key to bring up the Position attribute.

6. Click the stopwatch next to the word Position to activate keyframing. This will set an initial keyframe wherever the playhead is.

10. Hit F9 to Easy Ease them in so the animation is smooth.

12. Like before, hit P to bring up the Position attribute.

21. Press the spacebar to play your animation. The waves move in and out!

5. Click the stopwatch next to Blurriness to activate keyframing.

10. Now we’ll add a fade out as well to the text, and we’ll be done! Bring the playhead back to the beginning. Hit T on your keyboard to bring up Opacity options.

11. Press the stopwatch to start keyframing.

17. Press the N key to trim the timeline so when your animation previews and renders, it’s about three seconds total.

All done! You now have a cool wave animation using just Wave WarpEffects with a few other effects to sell the look. Try pairing Wave Warp with different shapes and Masks to create different forms of liquid, or changing the color of the Solids you work with. You can even add bubbles with some of After Effects’ SimulateEffects, or use a Track Matte to contain liquid within text! Track Matte & Transparency in After Effects

Track mattes are a fun and powerful tool in After Effects that allows you to use a clip, still image, or text to dictate the transparency of the layer beneath. Stroke Animations in After Effects

A stroke is pretty simple: It’s just the outline around your letters and can be modified to have a different appearance or even motion! Learn how to customize stroke in this tutorial.