One of the first things you’ll do as a new programmer is choose a text editor to work with on a regular basis. Two of the most popular text editors, Atom and Sublime, offer features that can make your work a lot easier. But which one is better?

Let’s start with the similarities

Both Atom and Sublime allow you to program in a variety of languages. Both include pre-populated fields and keyboard shortcuts, which save you a lot of time. Both offer plugins and packages to enhance the user experience. Both are free (well, Sublime is almost free; a license is required for continued use, but the free trial is unlimited). Both are highly customizable.

How do the interfaces compare?

Atom has a sleek, adaptable interface. You can view multiple files simultaneously and drag them around the screen as you see fit.

You can also access Git and open a Terminal window right from the interface.

But perhaps best of all is Atom’s Teletype feature. With Teletype, you can share your file with a collaborator and work on it simultaneously.

You just need to grab the share URL and have your collaborator enter it in the Teletype field. Just like working on a shared Google document, you’ll be able to make changes to the same document at the same time. This feature really sets Atom apart. 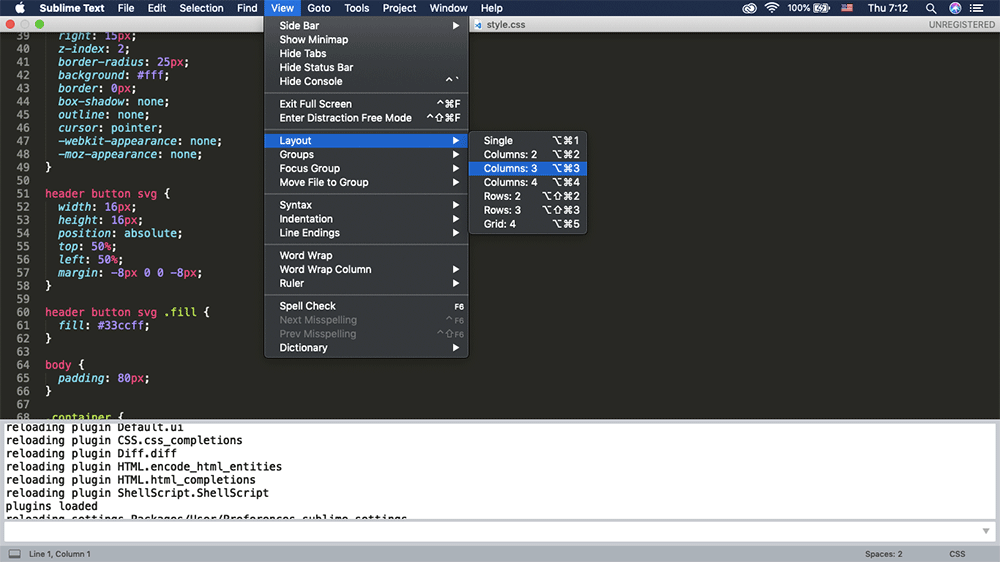 Sublime has an equally attractive user interface, a built-in terminal, and ample customization options. It is slightly less intuitive than Atom. For example, changing the layout to a 3-column layout does not automatically disperse your open files to those three columns. Drag and drop doesn’t work, either.

Sublime is easy to customize and has a handful of highly desired features, but it’s not as intuitive as Atom. You could use most features of Atom without having to refer to the documentation. There’s a bit of a learning curve with Sublime, but nothing insurmountable.

How do the packages and themes compare?

Atom has a massive library of packages and themes to choose from -- or you can create your own.

Packages allow you to integrate features that don’t come with Atom. There are some handy tools here, including spell checkers, code “cleaners”, and various linters.

Themes allow you to change the way the interface looks. Here, we’ve installed just a few themes, but there are plenty to choose from and customize, depending on the look and feel that you prefer.

Like Atom, Sublime offers a wide variety of packages and themes.

The main difference is how you navigate to the packages and the themes. The user interface, again, is not as intuitive as Atom’s, but when it comes to packages and themes, most people install them, set them, and forget them.

You won’t need to change your color scheme on a regular basis, so the few extra clicks you’ll need to accomplish this in Sublime are not a big deal in the long run.

So, what’s the verdict?

When deciding which code editor to use, there isn’t a clear answer. Atom, Sublime, and other editors, such as Visual Studio Code and Vim, all provide functional platforms to program.

Many students prefer to use whichever text editor their instructor is using so that they can use the same color scheme and follow along in real time. This way, any differences between your code and the instructor’s code are easy to spot.

The bottom line is that in our coding classes, you can code in any text editor that you choose; it’s truly a matter of personal preference. When you look at an app or a website, you can’t tell which text editor the programmers used. The sites that you design in our web development classes and bootcamps and the apps that you build in our Full Stack Web Development Certificate Program will be amazing, regardless of the text editor that you use.